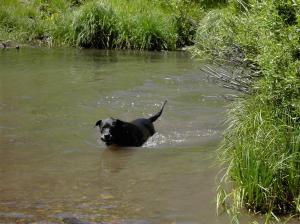 I had a wonderful black lab/pit bull mix for 12 long years. She was my best friend, my confidant, my shadow, and my guru. She was friendly to everyone and loved to chew on rocks. I miss her even though she died five years ago. Thankfully, in the short time I had her she taught me what it means to be human through a dogs eyes.

I found her in a shelter in Bend, Oregon. My husband and I were casually looking for a dog. We weren’t dead set on getting one, we just thought it would be fun to go to the shelter to see what they had. She was the first one I saw when we walked in to the shelter. Her fur had a dusty coating of dirt on it so she kind of looked like a smokey tinge. She sat patiently in the kennel looking intently at me, her tail wagging slightly, and she seemed to be looking right through me.

My husband called me and I walked away towards a dog he was looking at. “Oh, that one is cute.” I said. We walked around for a few minutes and then we left. In the car we discussed what dog we liked and if we wanted one. I said, “I liked the black lab mix. If we get one that is the one I want and her name will be Smoke.” That was the end of the discussion. I knew she was the one; no question in my mind.

We brought her home and at the time we were staying at my mother-in-law’s house. She had a house on 5 or 6 acres with no fence. She had free reign of the place. Smoke had a buddy named Mooner who was my sister-in-law’s healer mix. They got along great. The first thing Mooner did was teach Smoke where the river was; which happened to be 3 miles away. This was my first lesson of what I had in store. The lab in her loved water and the pit bull in her made her pretty much obsessed with swimming every chance she got.  We learned rather quickly one sunny afternoon when we found a beautiful swimming hole was that she did not know when to quit. I had been sitting on the beach with my daughter when a young man came up to me and asked me how long my dog had been swimming. I looked at my watch and realized it had been 8 hours since we had first arrived at the river. “Eight hours!” I screamed for her to come out of the water. I nearly dragged her to shore and forced her to stay with me for the rest of the day. After this when would go to the river with Smoke we would have to make sure we dragged her out after a while for fear of her dying from exhaustion. This obsession taught me that no matter how much I like something it is important to pace yourself.

My second lesson came when we found out that Smoke loved to play ball. She just didn’t like to play ball with us. She had her own game we learned when we caught her playing one morning. There were wooden palates sitting outside by the greenhouse and Smoke took her ball and dropped it down one of the slats. She then began the game of trying to get the ball. At first we were dumb enough to get the ball free and give it back to her and then she would immediately put it right back in the slats. This would go on for hours and hours. Once again the obsessive pit bull side of her personality.

Later after Smoke got bored with tennis balls she found rocks. First, she found little tiny ones that she would accidentally swallow. We would have to wait patiently for them to come out; one way or the other. Eventually they got bigger and bigger, till they were nearly the size of her head. Dropping these small boulders on your lap was a favorite past-time. She would insist that you throw the rock for her and if you were the unfortunate one to fall for this tactic, you were stuck throwing the rock for hours and hours. However, the most fascinating part of this game was that no matter how far you threw this particular rock, she would always bring you back the exact same one. If nothing else, persistence is the lesson I learned from her obsession with rocks.

My third and final lesson came five years after her death. I have always had this defect in my personality where I want people to like me and when I find out that they don’t I somehow take personal offense. I recently found out that someone I thought liked me does not and I had been stewing about it for a few days trying to figure out how I felt about this. I am 40 years old and should have somehow grown out of this flaw in my personality, but it had once again shed its ugly head.

There was no real great loss from her not liking me, because she was merely an acquaintance I have known, but never really hung out with or did anything with. I was unfortunately thinking about her when I glanced at a picture of my Smoke that I have on my desk. I smiled thinking, “What would Smoke do?” Well the answer was quite simple; she would not care.

Smoke was friendly to everyone, well everyone that is, except the meter lady. I found out after I found Smoke growling and barking at this woman one sunny afternoon while hanging outside with my dog. I was horrified because in the 9 years that I had had her, she had never growled or barked at anyone. I looked at the ladies hand and saw pepper spray. Apparently, she had sprayed pepper spray in my dog’s face the day before and was willing to do it again; if I didn’t get her under control. Well needless to say, I held my tongue for fear of getting pepper sprayed in my face. (Happily, I found that she didn’t work as a meter reader for much longer. )

My point is that Smoke liked everyone and if someone didn’t like her, excluding the meter lady, she merely walked away and found someone else willing to play with her and give her attention. Well the same goes for me I suppose. No big loss demands no big attention.

Overall, Smoke taught me to be persistent, pace myself while having fun, and to be kind.  She had an amazing spirit and I am thankful for the 12 years I got to spend with her. She was always right beside me teaching me how to survive sad days and how to have fun with blind abandon. 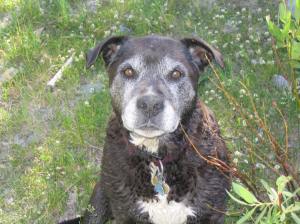 I am multipurpose when needed, user friendly occasionally, ironic most days, pessimistic/realistic take your pick, unique in my understanding of myself, defiant in my approach to injustice, and poetically full of it:) View all posts by aklesath